We are super charged to offer this unique collaboration with Irregular Choice. This collection takes you on a road trip across the USA, striding across San Francisco’s Golden Gate bridge, rolling through Las Vegas, lighting up the skyline in New York and warming it’s toes on Miami Beach. The San Francisco pump is a tribute to our hometown. This pump features our famous landmarks: the Golden Gate bridge, our charming cable cars and famous skyline with glitter accents. Those who have visited and left their hearts in San Francisco will love this one.

These San Francisco themed socks – available in your choice of dark blue or turquois – feature a colorful image of the Golden Gate Bridge, with a cable car in the foreground.

Show your love for your favorite city every time you write a check! These San Francisco themed personal check designs can be used for any US bank checking account. Several scenic designs featuring photos and illustrations of the San Francisco city skyline and the Golden Gate Bridge, plus a few SF Giants designs for the sports fans. Matching return address labels and checkbook covers are also available.

San Francisco Waterfront and Skyline Personal Checks: Two alternating images: The waterfront and skyline are artfully photographed at sunset on the first image. The second image shows the tranquil waterfront on a wonderful afternoon. See yourself by The San Francisco Bay every time you open your checkbook.

Golden Gate Bridge Checks: The distinctive burnt red color, two soaring towers and rows of suspension cables have been painted in incredible detail with the mountains, waves and twilight sky completing the illustration. Add this artistic interpretation of a modern marvel of engineering to your wallet today.

San Francisco Bridge Checks: The city San Fransisco cannot be mentioned without putting the image of the Golden Gate Bridge in ones head. This four series set of personal bank checks features the iconic American landmark shrouded in the famous San Fransisco morning fog, rendered multifaceted by light of the rising sun. Perfect for the check design for any northern California native.

San Francisco Giants Logo Checks: Celebrate your favorite team with four dynamic designs featuring either an image of a glove, bat and ball with the team name, a Giants baseball in a glove, a baseball field with the team name, or a baseball field with a silhouetted Giants batter. Plus, each of these baseball checks features an orange and black border, the team logo, and the MLB logo to make it an unforgettable and official tribute to your team! These Major League Baseball personal check designs are available from Bradford Exchange Checks, and are expertly re-created with premium-quality check printing. Don’t wait to celebrate the team who has won the most games in the history of American baseball. Order your San Francisco Giants personal check designs now!

SF Giants Personal Checks: Get MLB checks for any of the 30 teams available. 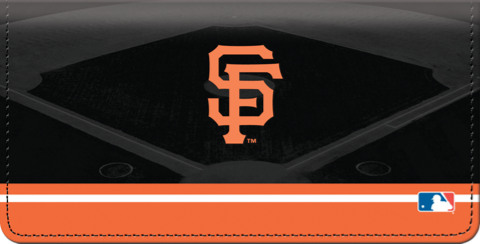 These San Francisco ornaments are a great gift for someone who loves living in San Francisco, just moved to the Bay Area, or for a vactioner who thoroughly enjoyed visiting this city and all it has to offer. These bold ornament designs feature popular landmarks and tourist attractions including the Golden Gate Bridge, Fisherman’s Wharf, Cable Cars, and more. There’s also something for the San Francisco 49’ers and Giants fans!

San Francisco Scenery Ornament: The Bay Area comes alive with this ornament that highlights the cable car and Fisherman’s Wharf of San Francisco and will bring fond memories to the surface every time you hang it on your tree. This ornament permanently says SAN FRANCISCO across the front and we can personalize the bottom with names, date or personal, special message to make this ornament uniquely you!

Fisherman’s Wharf Sign Ornament: Land ho! This personalized ship’s wheel ornament representing San Francisco’s Fisherman’s Wharf has a crab in the middle to remind you of the fresh seafood, clam chowder in sourdough bread bowl and Dungeness crab legs that you can get right down on the pier. Still a functioning shipping wharf, this popular tourist attraction is on everyone’s list who ventures to San Francisco. Stop in at Ghiradelli Square, Golden Gate Bridge, Pier 35 or ride the cable car streetcars to navigate the different neighborhoods in the Bay Area.

San Francisco Historic Scene Christmas Ornament: A major financial and cultural hub of Northern California, San Francisco has many iconic landmarks such as the Golden Gate Bridge, trolley cars that travel up and down the hilly terrain, Fisherman’s Wharf on the coast where fresh seafood is abundant and delicious as well as the modern Transamerica Pyramid skyscraper. Even represented is the Christmas tree that is put up every holiday in Union Square with a tree lighting ceremony. The words SAN FRANCICSO are permanently across the bottom in red glitter.

San Francisco Giants Stadium Seat Ornament: San Francisco Giants fans have alot to be proud of! As one of the longest established professional baseball teams, the franchise has won the most games of any team in the history of American baseball. The Giants have won seven World Series Championships and have the most Hall of Fame players in all of professional baseball. Celebrate this great team with this awesome San Francisco Giants personalized Christmas ornament! This is a mini replica of baseball stadium seat. The chair is in the team colors of black and orange and the SF logo is printed on the seat back. The chair even comes with cup holders! Great gift for a die hard Giants fan to display on the tree this season!

San Francisco 49ers Stadium Seat Ornament: The San Francisco 49ers play thier NFL games at Levi’s Stadium in Santa Clara, California. The 49ers are known to have one of the NFL’s greatest dynasties. They won five Super Bowl Championships in just 14 years. 49ers fans will love to commemorate another winning season with this personalized 49ers football ornament! The stadium seat is red with a gold frame, and is complete with two cup holders. The SF logo is on the seat back. 49ers fans, who are waiting for the next Joe Montana, will be proud to display this ornament on their tree. Perfect gift for a season ticket holder or any fan of the team.

Golden Gate Bridge Ornament: The international orange color of this historic suspension bridge was chosen because it not only enhanced the natural surroundings but because it made the bridge visible in the fog! This personalized Golden Gate Bridge ornament is the perfect keepsake for a trip to San Francisco or for an architectural enthusiast who loves the famous landmarks of California. Civil engineers have deemed it a wonder of the world because of its beauty and lasting construction. At one time it was the longest suspension bridge in the world, but now it is distinctly the most photographed bridge in the world, linking the San Francisco Bay to Marin County. You will fall in love with this Polish glass rendition with bright blue skies and glittered enhancements.